Lives and works in Altadena, California

I work for the connection between the idea and the execution of that idea. Ideas and feelings about endurance, fragility and permanence drive my practice, as I imagine the first people to carve images of their human self in rock felt. The idea that Lucy Lippard suggested as ‘‘ego-body” resonates with me as I work.

The increasingly complex technologies that we use to overcome time, distance and decay engulf us, stretching the grasp we have on our mineral bodies. I think about the effects on memory and desire that these objects have on myself and culture. The drive to find meaning exerts itself on the many materials I use to express these ideas.

Photographers credit for the photographs within this site:

“…Aylmer’s installation interacts with both the physical and contextual space of Pomona College. Constructed of wood found on the campus, (a dead oak branch) the work refers to Aylmer’s personal association of the tree with life cycles, growth and time. In its structural abstraction of nature’s patterns of growth and decay, her installation combines organic form with mathematical reason. By creating a nearly mechanical repetition of a natural object, she intimates industrial precision without conforming to the bland efficiency of mass production….”

The repetitive form flows through the gallery space, engaging with, yet undeterred by, the architecture.

Sliced as in a sampling, the absent limb is presented under glass suggesting an image preserved for further attention, intimating current importance and future usefulness. That the image is so processed that source is uncertain, the purpose unintelligible, adds to the mystery. Identifying and cataloging the known parts of mysteries, as science does, offers a method of channeling the drive to know.

Inspiration for this piece is the improbable tale of the monkey with its hand in the coconut, too full of rice to pull it out. The tension of the title is in the appetite for energy (bulb form) that could stretch thin the resources that support human activity.

A small occupation of space by repetitious metal objects, photographically enhanced with tiny film negatives of a piece of sculpture that appears pod like (organic). 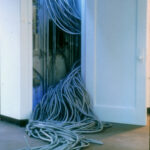 In one of the first wave of alternative sites for art presentation, the Foundation for Art Resources (FAR) selected the abandoned Old Federal Reserve Building, in which to hold the FAR Bazaar. Over 150 artists hung traditional painting, and sculpture, performed, and installed site specific work. Aylmer was assigned the tele-communications closet. The invasion of technology takes on a fearful organic presence.

Energy, knowledge, electronics…a unified field theory of the 21st century. Transistors and books, the translation of knowledge from form to form still eludes the fundamental mysteries, demonstrating only the human drive to know.

The pendulum motion of the plumbob, the same motion of photons which baffled the “is it a wave, is it a particle scientists”, leads to the understanding and development of the electronic motion that is the basis of cultural shifts in communications and storage of knowledge. 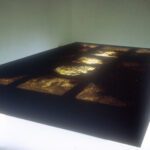 …The idea of the painting sliding off the wall onto the floor progressed to the raising of the surface to occupy architectural space. Floating on a bed of photons, filling available space, except for a 2’ area around which the viewer could move, causing a relationship with the object to develop. The glowing, apparently bubbling surface intimates the primal soup, the chaos that is contained within the rational grid… 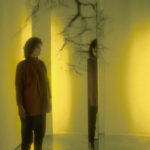 Low light promotes an initial sensory response from which bodily memories of the viewer/participant expand on the simple icons present to create an individualized experience. 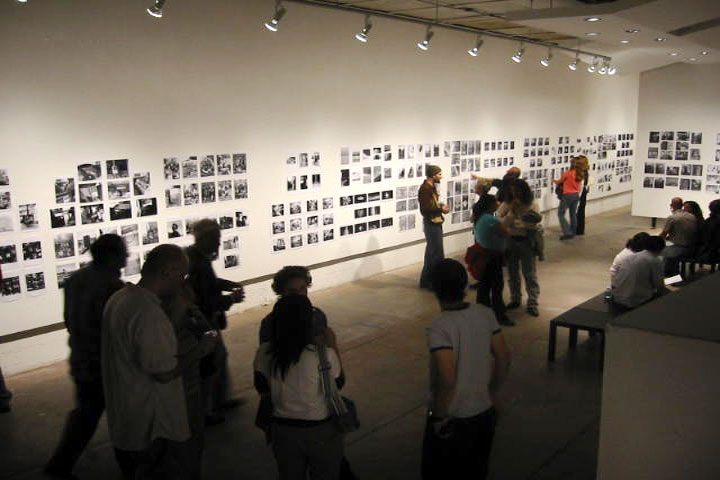 In exploring the possibility of an all internet, simultaneous international exhibition, 6 curators selected 10 artists from each of 6 cities to participate in presenting each city through the eyes of artists, photographers, architects and graphic designers.

The set of 600 (b/w) digital images were reproduced by each city and exhibited simultaneously in June 2005 in London, Berlin, Los Angeles, Manila, Bankok and Saigon.

Using photographs of icons of the “city”: buildings, signage, electric towers, Aylmer digitally blends them with ink wash painting, a traditional and essentially gestural technique. Luminous and ominous, these visual bon-mots are haunting comments on the struggle against submersion into the engineered: a sensory suggestion of having lost that struggle.

2003 Corpus Delicti: {noun}
The body of the offence; the essence of the crime. 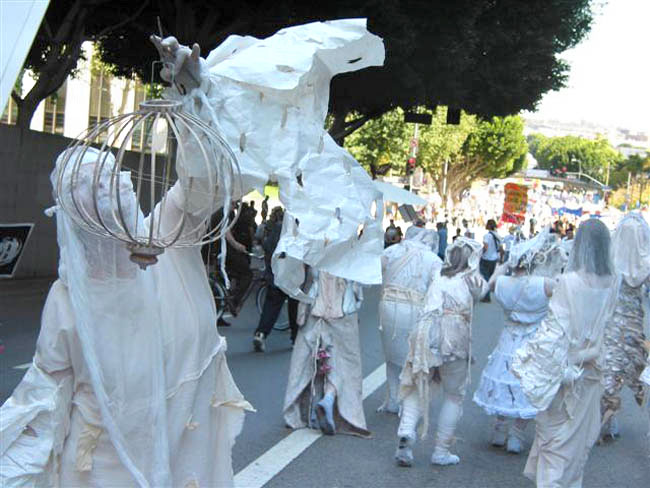 Butoh is a dance form that originated in Japan in 1959 as a response to the Hiroshima and Nagasaki bombings, and the resultant horror of the death, disability and decay that haunted the children of this holocaust. Evolved from Japanese Noh and Kabuki theater experience, informed by ‘modern’ dance expressions, interpreted by a generation re-energized by western and European cultural influences, Butoh opposed the fluid beauty of ballet, instead developing a vocabulary of distortion and agony. Corpus Delicti, founded by Joe Talkington & Carla Melo, appropriated the aesthetic of Butoh and cannibalized its philosophy, digesting it through the multicultural body of Los Angeles. Aylmer was one of over 50 performers who participated in Corpus Delicti. 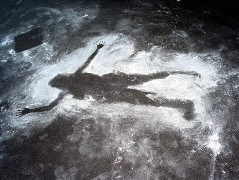 (Outline of one of the crowd members who became a participant.)
(cornstarch on asphalt)

Using butoh and modern dance moves with a costume made of the Xerox copies of over twenty friends giving the finger to the government, Aylmer expressed herself in a performance titled Digital Poll.

Two Solo performances were given, one on the Capitol steps lawn during the fireworks display on July 4, 2003 and the other at the Vietnam Veterans Memorial on July 6th. 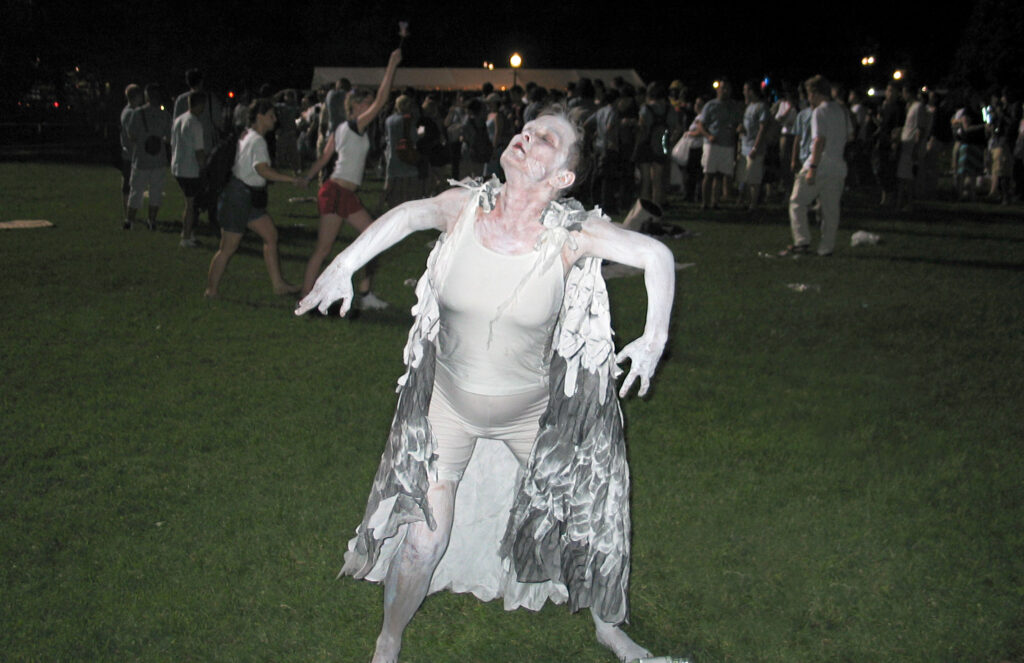 (on the Capitol steps lawn in Washington, D.C.) 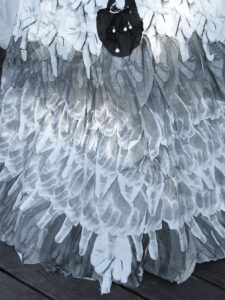 Annabelle Aylmer and Karen Bonfigli presented a performance for the Trailmarkers: One mile of Art, produced by Newtown Arts of Pasadena, which was held in the Hahamongha Park in the North Pasadena/Arroyo area.

Katsujinken: one meaning of which is “The sword that protects”.

Conceived during the bombing/invasion of Iraq, we struggled with notions of violence, the need for it, if it is to protect one’s community, and gratuitous, which we felt the Iraq invasion was; and our personal sense of betrayal by our government, which elicited enormous feelings of violence within our hearts.

‘Aikido’ can be translated as the “way of harmonious spirit”. The goal of the training is to manage the ki of a physical conflict in a controlled way, disabling your opponent by harmonizing your energy. Blending Bonfigli’s Aikido practice with Alymer’s Butoh experience, they created a a performance reacting to the invasion of Iraq. They first constructed a local space from which they emerged to perform along the mile of other installations and performances, periodically chanting Japanese tongue twisters to the sounds of vibrating brass bowls to heighten the sense of absurdity.

A 23-minute video of a Butoh dance is projected onto a translucent plastic wall of the old greenhouse in the former Hortus Nursery in Pasadena, CA. The interplay of the projected video and the irregular patterns of light and dark made by the partially discernible ivy growing on the outside of the greenhouse is the location in which the spirits of the dance are a bride, a geisha, a crone, and a shaman.